The Migrant Talent Garden (MTG) Study Visit (SV) with the participation of representatives of the organizations involved in the project, took place in Sofia on 14th of May. 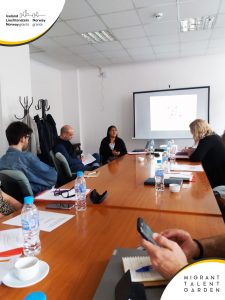 While organizing SV Hemus Tek’s main goal was to make the representatives of the partners aware of the migration situation in Bulgaria, and in particular in Sofia, the start-up business environment and the factors that Hemus Tek has considered important for the determination of the organizations with which the company was arranging partnership relations in order to implement the MTG project.

Representatives of some of those organizations namely “The Council of Women Refugees in Bulgaria”, “Caritas – Sofia” and ” Bulgarian Startup Association” (BESCO) were invited to participate in SV to acquaint the partners with their experience. The SV participants also visited the Integration Center (for migrants) of Caritas – Sofia.

A number of particularities were identified during the SV in Sofia.

According to the International Organization for Migration, about 160 000 migrants live in Bulgaria. These in general can be divided into four groups – migrants who have come to receive education, some of whom subsequently find work and remain permanently in Bulgaria; migrants coming to work (most of them seasonal workers with temporary jobs); migrants who come to Bulgaria to start their own business or to expand their own businesses started in other countries and asylum seekers in the EU (Bulgaria). 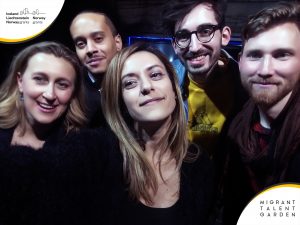 From MTG project goals point of view the most interesting are the migrants coming to start or expand their own businesses as well as some of refugees / asylum seekers – those who, for various reasons, intend or might wish to be establish permanently or at least for a long time in Bulgaria. Unfortunately, the experience of NGOs and the governmental institutions working with migrants shows that the majority are with very low educational level and significant lack of knowledge of foreign languages ​​(Bulgarian and English), which is also a major problem in starting up their own business. Moreover, many refugees regard Bulgaria as a transit point on their way to Western Europe. The main reasons for this are the low social benefits in Bulgaria compared to other countries and also the fact that many of them have relatives or friends in the West European countries.

During the SV, it was emphasized that there are no legal and political differences in the conditions of the business between migrants and Bulgarian citizens regarding the starting up and developing businesses.

Having in mind the current situation in Bulgaria and in order to achieve the objectives of the MTG project, Hemus Tek intends to develop active partnership with two main type of organizations: with those working actively with migrants and refugees (which are mainly humanitarian organizations) and with the organizations (both non-governmental and governmental) which provide a favourable environment for startups.