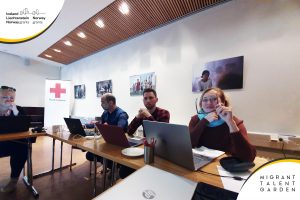 On the 19th of June 2019, the Reykjavík Red Cross (RRC) hosted our partners from Bulgaria, Croatia, Greece, Lithuania, Latvia and Norway for the Migrant Talent Garden study visit in Iceland. We started the visit by an introduction to the Red Cross and especially the projects for immigrants and refugees in Reykjavík and the country as a whole. The number of projects for immigrants and refugees have increased in the last few years as the country is seeing the flow of immigration as never before. In 2018 there were about 43,736 immigrants in Iceland, which is about 12.6% of the population. In 2012 the percentage was only around 8% so there has been an increase of 57.5% in only 6 years. Most of these immigrants are going straight to the workforce but about 19.2% of working people are immigrants. Immigrants however do not receive the same salary as locals and received on average 8% lower salaries, according to 2017 statistics.

In 2018, Iceland gave asylum to 148 individuals, and increase from 138 individuals the year before and 111 individuals in 2016. The main countries from which people receive asylum from are Afghanistan, Iran, Iraq, Pakistan, Palestine, Somalia, and Syria. Every year the Icelandic government accepts about 50-70 refugees through the third country resettlement program. The Icelandic government and the Red Cross in Iceland are currently focusing on evening the services provided to the refugees that go through the asylum system and the quota refugees that come through the third country resettlement program as the latter group has until now received more services upon arrival by the government.

We introduced to the MTG group a few of our programs that we run in the Reykjavík department in more detail. The first being the ‘Open house for immigrants’, in which we offer practical assistance. About 600 individuals have received assistance through the Open house since it started in 2016. 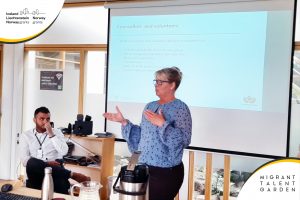 The RRC has also runs a cultural course for immigrants called ‘Welcome to Iceland’ for two years now and graduated 80 participants. Lastly, we have a project called ‘Refugee guides’, in which we pair locals and refugees together for one year. This method has proven very effective in assisting the refugees in their integration process.

The MTG group also visited The Directorate of Labour and got an introduction to the services they provide immigrants and refugees. The directorate has a special refugee team with four staff members, one of whom is a refugee from Syria. They provide assistance with making CVs, applying for jobs and also going with them to interviews. They also introduced to us a European cooperation project that the directorate were a part of, which was focused on empowering women of foreign origin in terms of employability, self-esteem and entrepreneurship skills. 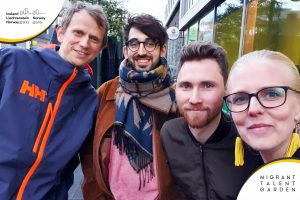 In the last session of the study visit we had a discussion group with a researcher, who has researched immigrants in the Icelandic labour market, and three immigrants who discussed their experience as immigrant entrepreneurs in Iceland and in the general labour force. The discussions were very lively and many opinions and experiences were shared. Some of the key points of the discussions were that there is definitely a barrier of entry for immigrants to start their own business or start-up in Iceland, mostly due to language barriers and lack of knowledge on the local system. Immigrants also have less social network in the country and therefore it’s more difficult to seek guidance and assistance. There was however also a general consensus that Iceland is a country where it’s relatively easy to start a company as there is low level of bureaucracy and generally the locals speak English.

The point was also made that immigrants are used to facing uncertainty and therefore they are in some ways more equipped to deal with the risk and uncertainty that comes with starting a business.